‘Siri Bhoovalaya’ is a   distinctive piece of literature which is scripted in numerals.  Integers (of values  1 to 64) are arranged in 1270 Chakras where each  Chakra is  a matrix of 27×27 Integers.  Each of the Integers is associated or encoded with a phonetic character primarily of origin in Kannada.   Deciphering of sequences of numerals of a Chakra in specific manner reveals poetry and verses in different languages.  In addition to Kannada, the languages in which the Chakras manifest poetry and verses include Prakrita, Samskrit, Telugu, Tamil, Apabhramsha and Pali etc.   totaling  718 of dialects.  The subject matters covers many topics including religious scriptures of Jains, Vedas, Ayurveda, Astrology  and Mathematics too.

Entire contents of Siri Bhoovalaya are segmented into nine divisions called Khandas and each of Khandas is further divided into Adhyayas. Each Adhyaya is constituted with a number of related Chakras. These Khandas (divisions) have been named by Muni Kumudendu as:

Muni Kumudendu was contemporary to King Nruptunga of Rashtrakoot Dynasty. Mallikabbe, the wife of one of Nrupatunga’s army officers, recognised the importance of Kumudendu’s Siri Bhoovalaya and had copies of this great epic made and distributed these among the Jain acharyas of her time.

One of these handwritten copies on Kori paper survived till the twentieth century and was found in the possession of a Jain scholar named Shatawadhani Shri Dharanendra Pandit, who was resident of a village called Doddabele near Bengaluru in Karnatak.

Shri Yellappa Shastri, an Ayurvedic pandit,  was too curious to learn the contents but was not allowed to do so. In his efforts to get hold of this granth Shri Yellappa Shastri got married to a niece of Dharanendra Pandit and finally he was able to acquire it, in exchange of gold ornaments of his wife Jwalamalini, from Dharanendra’s sons in the 1920s, after the demise of Dharanednra Pandit. There is another version of this incident, wherein Pandit Shri Yellappa Shastri, then resident of  Benagaluru, had to move away to village Doddabele because of plague outbreak. Subsequently he got married to Shri Dharnendra Pandit’s neice and later on acquired possession of the granth.

Yellappa Shastri spent thirty years trying to unravel the mysteries that he was sure Siri Bhoovalaya contained. At last, his dedication and hard work paid off. One day in 1950, Yellappa Shastri suddenly found that he had made a break through. This, naturally, led to his deciphering the verses as well. Three years later i.e. in 1953, together with co-editors Karlamangalam Srikantaiah (a freedom fighter with an abiding interest in history and inscriptions, who had been working on Siri Bhoovalaya along with Shastri since 1935) and Ananta Subbarao (inventor of the Kannada typewriter), Yellappa Shastri released the first volume containing a compilation of their findings. A second volume was released two years later, in 1955. In these two publication Adhyayas 1 to 34 were decoded and detailed explaination of the contents were made available in Kannadi language.

In 1956, the National Archives, New Delhi, with active efforts by Pandit Yellappa Shastri microfilmed all Chakras and other relevant information on Siri Bhoovalaya as the ancient Kori paper containing the text was deteriorating. Pandit Yellappa Shastri also included on microfilms decoded text of remaining Adhyayas i.e. from Adhyaya 34 to Adhyaya 59 in Kannadi script.

In April 1957 Yellappa Shashtri moved to New Delhi where  Acharya Deshbhushanji worked along with him for preparing Hindi commentary on this scripture. But unfortunately only Yellappa Shashtri breathe his last on October 23rd, 1957. Till then only fourteen chapters were ready were later published by Shri Bhoovalaya Prakashan Samiti (Jain Mitra Mandal), Dharmpura Delhi.

Yellappa Shastri’s son, M Y Dharmapal, who put in his best efforts to carry forward the mission of his father,  published a Kannada booklet called ‘Siri Bhoovalaya – Ondu Parichaya’ to serve as an introduction to Kumudendu Muni’s intriguing piece of literature. Pustaka Shakti, the Bangalore-based publishers of Dharmapal’s booklet, have brought out two volumes of the deciphered sections of Kumudendu’s original work. The first volume was released in 2003 and the second, in 2007. A Hindi translation of the first volume has also been brought out to take this pride of Kannada literature to a wider audience.

Sri Naredra Jain (IDJO) also made a very important contribution by intiating a project  using Computer based techniques to decode all Adhyayas in Devanagri script.

It is my very humble endeavor to apprehend the great creativity of Muni Kumudendu who crafted a unique marvel about thousand years ago in Karnataka. This  inimitable creation of  Muni Kumudendu , which is   designated as  a unique treasure house of knowledge is  known as ‘Siri Bhoovalaya’. ‘Siri Bhoovalaya’ is a   distinctive piece of literature which is scripted in numerals.  Integers (of values  1 to 64) are arranged in 1270 Chakras where each  Chakra is  a matrix of 27×27 Integers.  Each of the Integers is associated or encoded with a phonetic character primarily of origin in Kannada.   Deciphering of sequences of numerals of a Chakra in specific manner reveals poetry and verses in different languages.  In addition to Kannada, the languages in which the Chakras manifest poetry and verses include Prakrita, Samskrit, Telugu, Tamil, Apabhramsha and Pali etc.   totaling  718 of dialects.  The subject matters covers religious scriptures of Jains, Vedas, Ayurveda, Astrology  and Mathematics too. Most of this work has not come to light due to difficulty in deciphering the schemes in respective Chakras.

Muni Kumudendu was a Jain saint in lineage  of Deshi Gana / Nandi Sangh. Under strange circumstances only remaining copy of the original manuscript of unique epic ‘Siri Bhoovalaya’ was brought to light by Pandit Yellapa Shastri through his tireless efforts in around 1950’s. Till that time this spectacular and only such creation in human history remained undiscovered. Since the whole script was in numerals and that too enciphered in variety of schemes, the work did not attract attention of even great scholars. Pandit Yellapa Shashtri deserves countless thanks for bringing this gem of originality to be recognized and appreciated by concerned persons.

Siri Bhoovalaya has primarily a Kannada base, but has been claimed to contain verses and poetry of 18 major languages and 700 minor ones. The whole volume consists of 1270 Chakras. Each Chakra is matrix of 27×27 integers. Each integer has value in range from 1 to 64 only. Each integer is associated with a Character (Kannada) and which has a corresponding phonetic value as well. In order to decipher a Chakra a scheme of traversing the matrix is specified, which is called a ‘Bandha’. Many of Bandhas have been specified by Muni Kumudendu but many more  yet remain to be discovered.

One Chakra is arrangement of numbers (in range 1 to 64) in a matrix of 27 rows and 27 columns. There are 1270 Chakras available and are classified into 56 Chapters.  It is estimated that sum all the Chakras contain 600000 Shlokas which is equivalent to 1400000 letters. 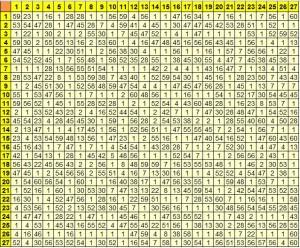 Following Table is used to substitute Numerals in all the Chakras into Phonetic Aplhabets . Some of the Phonetic Alphabets don’t find usage in contemporary scenario and in specific languages as well. 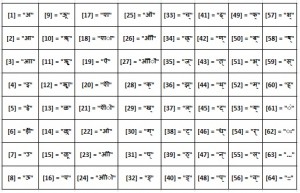 A Bandha is manner in which contents from a Chakra is revealed.  Bandha basically describes the method to traverse the 27×27 matrix and substitute respective numbers into letters to uncover the Shlokas or verses hidden therein the Chakra.  There are many Bandhas which are identified as Chakra-Bandha, Navmaank-Bandh, Shreni-Bandha, Hans-Bandha, Anu-Bandha, Mayur-Bandha, Saras-Bandha, Padma-Bandha etc. etc.

To decipher a Chakra-Bandha the 27×27 Matrix of the Chakra, all cells  are traversed in the sequence as illustrated in the figure starting from cell designated as  1 to 729. Cell 1 is located at Row-1 and Column-14, Cell 2 is located at Row-27 Column-15 and so on until last Cell 729 at Row-27 Column-14 is traversed. Substitution of Integers in respective Cells with corresponding alphabets results in plaintext in Kannada composed in ‘Sangatya Chhanda’. 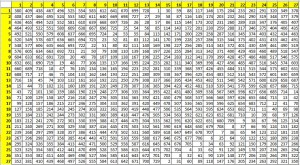 Chitra-Bandhas are named after the graphical figure (Chitra) they are associated with. In Chitra-Bandha a particular graphical figure or Chitra ( with its cells numbered in sequential order starting from 1) is superimposed on a specified Chakra at defined position (row and column) to reveal content in those particular  superimposed cells  on the Chakra in the manner as shown in following EXAMPLE. 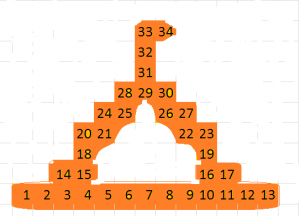 After appending string of numbers from the Superimposed Chakra’s cells  in the same order as marked on the Chitra-Bandha and then applying Phonetic Alphbet Substitution we get result as shown in the table below:

You are welcome, If you want to share your own experience in understanding various Bandhas, corresponding algorithms and Computerisation at any level. Your contribution will be published on this web-site.

12 thoughts on “Intro to SiriBhoovalaya”