There is a belief that Siribhuvalaya named ancient Kannada literature is completely written by filling the numbers from 1-64 in 27×27 matrix. Like this there were 16000 matrices written by Kumudendu Muni & his disciples as claimed by previous scholars. After initial publication of Siribhoovalaya book in 1953, many scholars started decoding it by applying Chakra Bandha or Shredi Bandha. Is this the way Kumudendu Muni filled the knowledge? Is it the right way to explore further literature? Let us discuss.
Let us consider the first Chakra which happens to be a 27×27 matrix:- 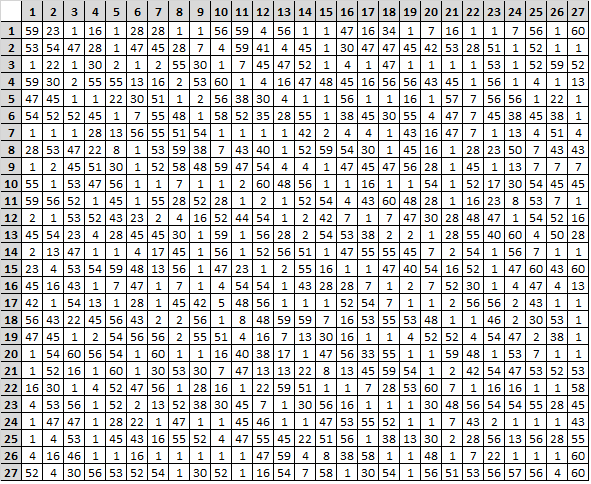 One has to traverse this input matrix by applying any pattern which can produce meaningful literature out of it. So there is a claim that somebody found out the following path matrix to decode meaningful poems out of it:- 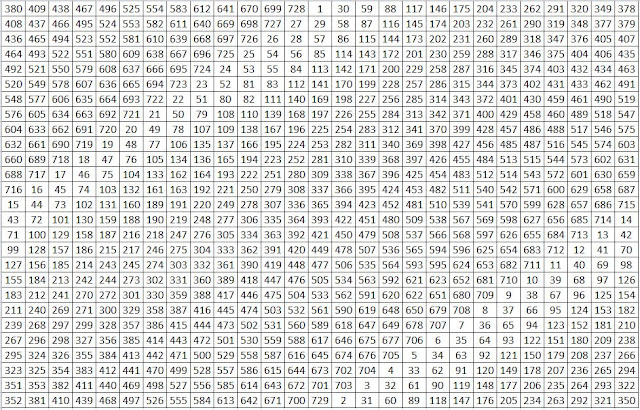 So you will get 27×27 = 729 numbers which has to be mapped to 64 Indian alphabets corresponding to 1-64 numbers. This can be generated easily by any computer program or even writing it manually. Let us arrange the deciphered letters again in a 27×27 matrix which has to be read row-wise:- 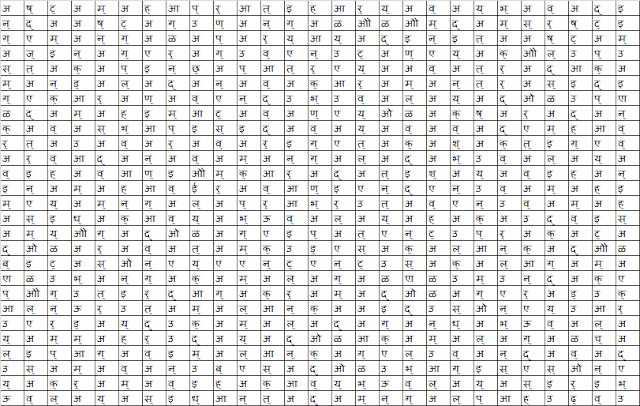 You have to read the above matrix in row-wise, by joining them according to the rules of Kannada phonetics. Remember that there is no punctuation marks like comma or full-stop anywhere in the matrix. First question is where to end the sentence and where to start the new one?
Answer is simple. Unless you are familiar with the type of the literature originating from this collection of letters, you will be left with a vast collection of words covering all 729 letters.
As this is the first matrix and many people know the literature generated from this, they could read it with very less effort. As you proceed further in deciphering the Chakras beyond 34th Chapter, you will be left with letters or words which doesn’t give any meaning. So what is the mystery here?
Logical brainstorming says that unless you have a ready reckoner literature  in hand, you can’t decipher and rearrange the text to get meaningful literature out of the Chakras. Even logic says that if the numerical matrix generates literature in any language, then the matrix should have been prepared by having the literature in hand. So there exists “Akshara-Bhuvalaya” means poetry having proper punctuation marks and also “Anka-Chakras” means the Chakras or numerical matrices which were encoded based on well churned literature in hand. To encode this, Kumudendu Muni has used 6000 grammatical, poetic and mathematical formulas.
So if you have “Akshara-Bhuvalaya” in hand, you can join the letters properly. Arranging the combined letters (Samyuktakshara) and placing them in 27×27 matrix reduces the number of letters approximately to 50%. Example is shown below:-

You can observe that, there are only 357 letters remaining after combining 729 letters. Now, where to start and where to end? It doesn’t follow any regular Chandas (fixed character pattern). This also validates that unless you have a literature in hand, you can separate the poems. As we know the literature from Akshara-Bhuvalaya, we can segregate it as follows:-

New kannada poem starts at the highlighted letters in the above table. You can observe the irregular gaps at the end of each poem as Muni has not used any Akshra-Gana but has applied Shabda-Gana or Shagana-Paddhati. It means, poems are not in fixed number of letter count rule but word count rule which eases to sing it in a particular style called as “Saangatya”.
Another point to be noted is that in the published book during 1953 they have demonstrated that joining the first letters in the rearranged poems generates a poem in “Prakrit” language. Here it is “अट्टविह कम् ….” । One discrepancy here is that the last stanza doesn’t belong to this series. Then how to relate and rearrange it to the next Chakra? Only if you are aware of the literature.
There is one more internal poem claimed to be generated in Sanskrit by reading 27th letter in every poem. If you collect the 27th letters from initial output of Aksharas deciphered from Bandha, it reads as “इ इ म् उ अ इ एा न् व् व् अ न् इ ह् स् अ ळ अ ए क् र् अ अ द् ए भ् उ”. If you join the letters: “इ इ मु अ इ एा न् व् व नि ह् स ळ ए क् र अ दे भु” which is meaningless in both forward and reverse traversals.
Now let us collect the 27th letters of output of combined Aksharas leading to poems as shown in above diagram. It gives “न्ग का र व क ला स” which is again meaningless. But the publishers have given star mark to the letters near to 27th one and shown the emerging of the famous Sanskrit verse “ऒकारं बिन्दु सम्युक्तम् नित्यं ध्यायन्ति यॊगिनः ….”| How they got it? It is just copied from the reference literature named “Akshara-Bhoovalaya” present with them. To get this output as intermediate letters, we have to again rearrange the above shloka table as follows:-